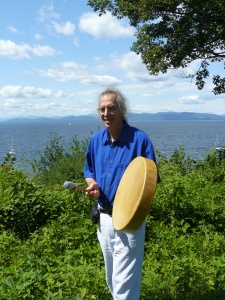 I grew up in a military and farming family, seemingly firmly European-American, except for those inexplicable times when my father’s family talked about “Indian stuff” in whispers  that stopped when we kids entered the room, or times when I was called, derogatorily, an Indian. My mother’s family identified as hailing from the British Isles, and strongly, as settlers.

Only on his death-bed did my father finally, proudly, say outright that we are Native, Still, his siblings, our aunts and uncles, continued to refuse to speak further about our identity other than to say my grandmother and grandfather were Native. They passed without helping us to understand who we are. They did what they felt they had to in order to protect my generation. I look on their efforts and sacrifices with gratitude, even as I wish it had been different. While my father’s family identified as Native. I do not have tribal affiliation, and grew up without a Native identity.

Today my work is deeply informed by the teachings passed on by my father’s family, teachings that reflect their life experiences and circumstances. As far as I know, my elders, mostly Pentecostal Christians, did not practice shamanism.

My parents grew up in hard, dark times; as a result, as I grew up they strongly encouraged me not to draw attention to myself, to be self-sufficient, and never to trust governments. The lives of people of Native ancestry in Indiana have historically been difficult, filled with anti-Indian racism and laws, and fair-skinned families frequently chose to pass as European. Not surprisingly, our birth certificates and military records have for generations listed us as Caucasian, even as our elders identified as Native.

My grandmother seldom spoke, except to say, “The children! We must protect the children!” There were the stories of hiding, danger, and fitting in, and those that suggested a longing for a more normal life. There was also constant paradoxical encouragement to refuse to draw attention to ourselves or the family, yet to excel in work and school.

It seems likely we will never know the details of our heritage.  I have decided to accept my father’s statement, and our family stories, as true even as they are incomplete. There is no doubt my father and grandmother understood themselves, and me, to be Native. Being light complected and growing up outside Native culture has allowed me to avoid much of the racism my family so feared. It has also meant that I have often found myself at the cultural margins.

I’m sure my Polio added much suffering to the lives of my parents, and fueled their fears for my wellbeing. As a Polio survivor I was encouraged to pass as non-disabled, although passing for me proved to be an impossible task. From an early age I faced ridicule, bullying, and prejudice as both a disabled boy and as someone others sometimes perceived as Native. From such experiences I developed a firm commitment to stand for civil rights for all people.

Growing up in this family launched me on a lifetime of learning. I have been graced with teachers of diverse ethnicity and from many traditions. I am also grateful to have met other individuals with similar family stories and histories along the way.

In Burlington, Vermont, and Dartmouth, Massachusetts.
774-202-4646
BY Appointment.
Loading Comments...